With NE winds building to 15 knots Division 2 started first with Kevin Lords Summer of 69 getting the best start and beating the rest of the division to the 1st mark. As the boats turned and headed South the lighter Y-knot, with Steve Lee at the helm, chased Summer of 69 taking the lead as they ran down the bay.

As the wind picked up and boats headed into the wind and significant chop Y-knot found the conditions less favourable and the heavier boats were able to catch them. Sirocco passed Y-knot Just off Long Beach as they headed towards the finish, with Brian Horley in HiJack following them.

In a close finish Sirocco crossed the finish line 1st in 2 hours and 4 minutes just over a minute ahead of HiJack with Y-Knot crossing 3rd in 2 hours 6 minutes. After handicaps were applied Pat Grogan (Sirocco) held onto 1st place with Trevor Smith (Relentless) 2nd and Kevin Lord (Summer of 69) 3rd.

Division 1 got away 5 minutes after the Division 2 start with Mark Tobin’s Cest La Vie leading at the start and beating the other boats to the 1st mark. Roger Uebe in his trimaran, Free Spirit, had a slow start and began working its way through the race fleet.

Running down the bay, in a brave move, Steve Simpson in Bodacious hoisted his spinnaker. In the building winds, with the boat healing, the crew struggled to keep the sail out of the water. They eventually dropped the spinnaker and ended up losing two places. Bodacious retired towards the end of the race with equipment failure.

Free Spirit worked its way up to 3rd, and in the cloasing stages of the race passed Paul Gooey in Out of the Blue moving into 2nd and began chasing Cest La Vie. As Cest La Vie and Free Spirit raced towards the finish line, Free Spirit just slipped past into the lead.

Free Spirit crossed the finish line 1st in Division 1 in 1 hour 53 minutes, just 14 seconds ahead of Cest La Vie. Out of the Blue crossed 3rd in 1 hour 59 minutes. Once handicaps were applied Mark Tobin (Cest La Vie) moved up into 1st place with Roger Uebe (Free Spirit) 2nd and Paul Gooey (Out of the Blue) 3rd.

With the Autumn series off to a competitive start, round 2 will be run on Sunday 13th March. The Jervis Bay Cruising Yacht Club welcomes new members, to get involved visit the club’s website www.jbcyc.com.au

Check out the photos in the Clubs Photo Gallery 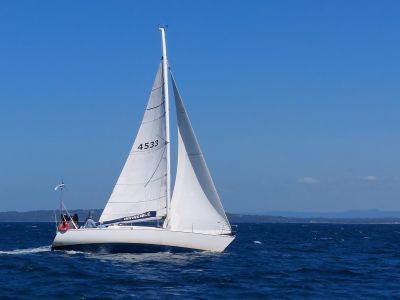